Thank you for all those who attended the demonstration at City Hall.  We had an amazing turn out especially considering the short notice and heat!    Thank you to everyone who wrote letters for the permanent file. They were also read at the council meeting.  They were very terrific. 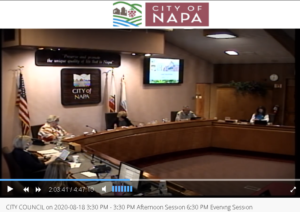 Senior Life Legal staff attorney, Allison Aranda and Mary Riley attended the virtual city council meeting on August 18. The Chief of Police for Napa gave a presentation explaining that existing laws were sufficient to deal with the picketers outside the Planned Parenthood clinic. Unfortunately, several city council members continued to push for new laws to restrict sidewalk counseling and gathering to pray outside the clinic. They directed the city attorney to draft a proposed law limiting speech, but it is not clear what form that will take.

Napa pro-lifers should be ready to speak out when this matter comes before the council again, which could be in a matter of weeks. Also, it’s not too soon to draft letters that can be sent to the council at the appropriate time. Life Legal is preparing to respond as soon as the draft language is made public, including a demand that, before the council takes action, Planned Parenthood provide footage from its security cameras to support its claims of offensive and harmful conduct by  pro-lifers.

In need of pregnancy resources?
Request a free consultation
Contact Us