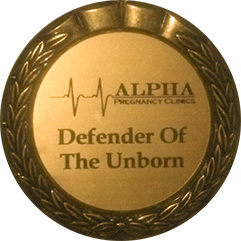 The Alpha Pregnancy Center Award for the Defender of The Unborn was presented by Marissa Amador, a great supporter of Pro Life Causes in Napa Valley, and a very good friend of Lt. Col. Ronald Gerard Maxson.

Good evening, ladies and gentlemen!  It is truly a great honor for me to be standing before you tonight.

It has been a tradition at Alpha to present one member of the community with the annual “Defender of Life” Award.

The award tonight goes to someone who has been defending the sanctity of human life for many years.

He was a career army officer and retired with the rank of Lieutenant Colonel after 22 years of service.  He served two tours as a helicopter pilot in Vietnam.  If you’ve ever seen the movie “We Were Soldiers,” just think of Mel Gibson’s role and you’ll have an accurate idea of what our recipient did in the war.  He earned not only a Purple Heart but also two Silver Stars for valor, five Air Medals with valor, and several Bronze Stars with valor.  You may not know that, in the military, the word “valor” is only applied when the soldier actually saved lives while earning the medal.
Being a true patriot, and moved by his passion for the Faith, he expanded his pro-life work.

He is a Board Member of California Right-to-Life, co-founder of the Life Legal Defense Foundation, a Fourth Degree Knight of Columbus, the Founder of Napa Valley Culture of Life, and the Napa Director of 40 Days for Life.

You can find him just about every morning, rain or shine, silently praying the rosary in front of Planned Parenthood on Jefferson.

He has raised his family to have the same love for the Faith and the same respect for human life.  His blessings here on earth include:

Whatever he does, he does it with valor.

The award tonight goes to a man I am proud to call my friend Lt. Col. Ronald Gerard Maxson!